S.D. Nelson, an artist and a member of the Standing Rock Sioux tribe, creates powerful and compelling picture books about the Lakota people. If you'll remember from previous posts, my favorite Joseph Bruchac book was illustrated by Nelson. Nelson's bold illustrations tell complex, graphic stories all their own.
Our library had several of Nelson's texts. I challenge you to find some! 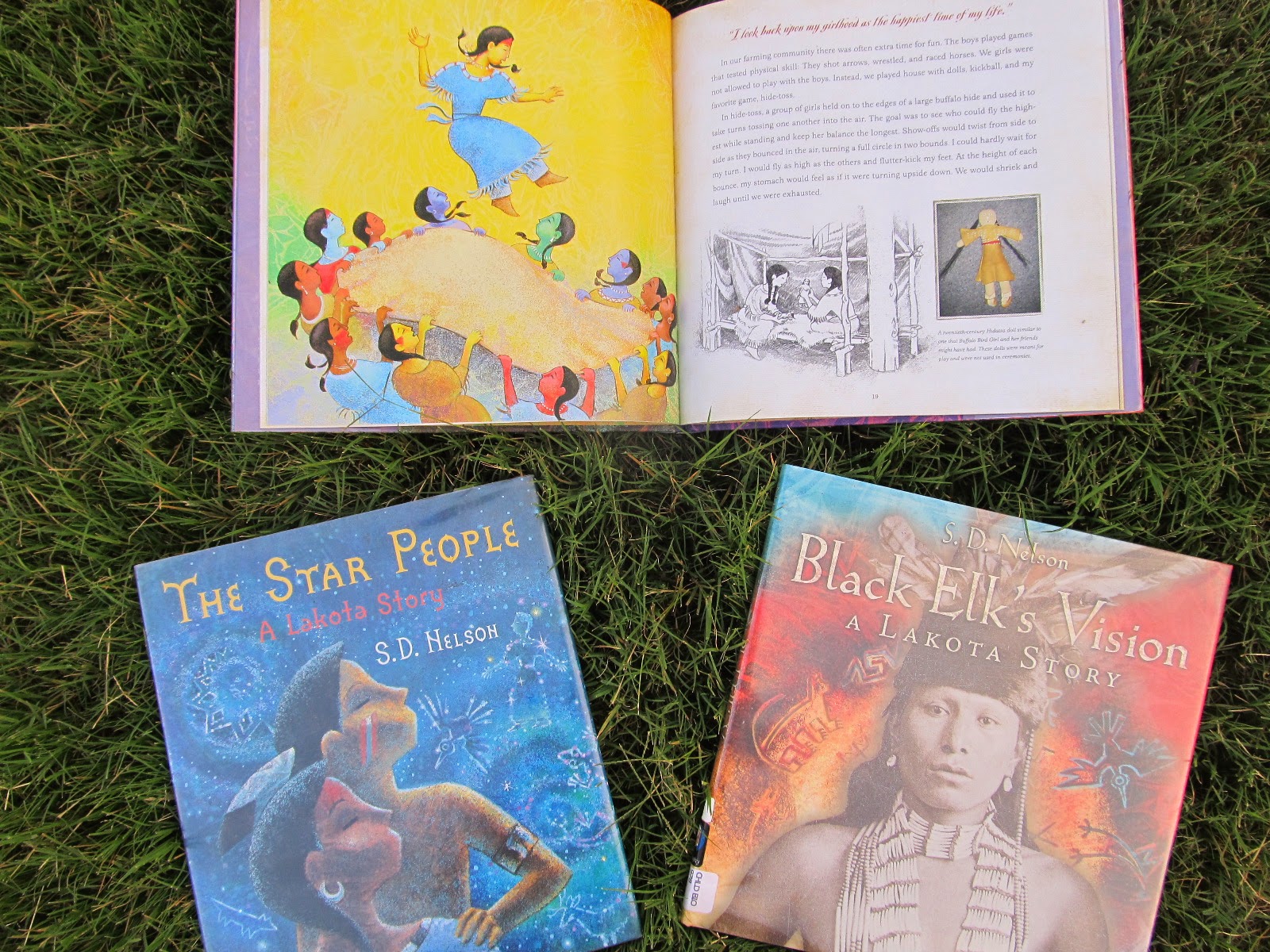 First, The Star People: A Lakota Story is a brief portrayal of a brother and sister who get lost. They begin the story innocently wandering and looking for pictures in the clouds. Once they are lost and in danger, they look to the stars and see pictures, too. Then in a Lion King twist, they see their grandmother among the stars, and she guides them safely home. Brief text makes this book accessible for young readers.

Buffalo Bird Girl: A Hidatsa Story is an exquisite, multimedia experience. Nelson combines his color illustrations, black and white pencil sketches, and photographs. Some of the photographs are historical, and others are pictures of replicas that you can visit today. The story describes Buffalo Girl's village, customs, and every day life. To me, this is the very definition of a living history book. It describes Native American life in great detail but personalizes it through one girl's perspective. There's a lot of text, so this book is more appropriate for early readers who've mastered short chapter books. But a parent could easily guide a younger child through these 40 pages.

Black Elk's Vision: A Lakota Story resides in the Children's Biography section of my library. Like other works by Nelson, the endpaper and flyleaf contain an engaging and informative historical map of the Dakotas. Also, like Buffalo Bird Girl, Nelson utilizes a multimedia effect to tell Black Elk's story. His Avatar-esque drawings sit alongside photographs of the real Black Elk. As a child, Black Elk received a vision of unity and peace. Then Black Elk fought in the Battle of Little Bighorn as young boy, and he performed in Buffalo Bill's Wild West Show  where "Buffalo Bill shot his pistol with no bullets, and we Indians fell down like we were all dead. The crowds of people cheered to see the great spectacle." After returning from Europe, he finds despair and desperation on the reservation. The people rally together, and Black Elk was shot in the stomach in the Battle of Wounded Knee. He survived only to live in the harsh reality of the reservation. He never saw his vision fulfilled, but he passes it on to us. While Black Elk's story takes place long after Columbus, his life covers some crucial moments of Native American history. He saw a lot! Be warned - this is a long 40 page story. Also, there's lots of buffalo hides and dead buffalo, in case you have a sensitive animal lover at your house! A visually enthralling and historically important read.

This post is linked up to Living and Learning at Home's Trivium Tuesdays - Classical Link-Up #120. Go see what some other classical mamas are up to!
Labels: Classical Conversations Homeschooling