A Grief Observed, A Review

C.S. Lewis and I are not the closest of friends. In fact, I spent a few years of my life writing a doctoral dissertation picking him apart. Most of this is probably the result of growing up in Christian schools, where we were force-fed Lewis every year. I know this will be blasphemy to many of you, but I find his writing to be theologically watered down to the point of almost Unitarianism, and I find his children's literature to be heavy-handed didactic dribble. The Chronicles of Narnia is one of the most sexist series for children in the marketplace. Yet C.S. Lewis is held up as the 4th member of the Trinity by many Christians today. It boggles the mind.

One of my dear friends says she just knows Jack and I will make up at the pub in heaven one day. (However, after interviewing some of his female students, I doubt he'd even speak to me at "The Bird and Baby" in the sky.) And there are parts of Till We Have Faces where I so want to root for him, where I think he's realized that women have thoughts, too! But then his letters, his attitude toward female students, and his cruel treatment of Susan make me want to box his ears. I tried to tell my friend that I'd gladly hang out with Joy, but we're not going on any double dates! Joy is the key to Lewis. If he'd met her sooner or she'd lived longer, it would have profoundly impacted his empathy, compassion, and creativity toward half the human population. 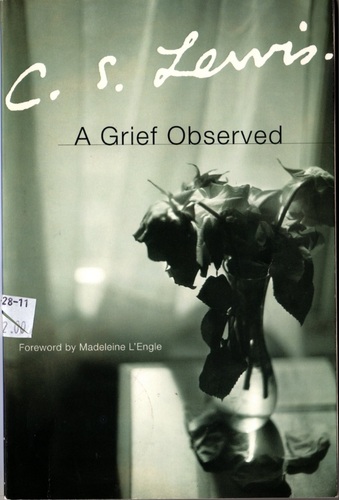 A Grief Observed is such a departure from other Lewis works. It's a stream-of-consciousness, real-time picture of the first stage of grief. From the first sentence, "No one ever told me that grief felt so like fear. I am not afraid, but the sensation is like being afraid. The same fluttering in the stomach, the same restlessness, the yawning. I keep on swallowing." It's so vulnerable. It exposes the physical side of grief, while at the same time delving into the spiritual: "The conclusion I dread is not 'So there's no God after all,' but 'So this is what God's really like. Deceive yourself no longer.'" We've all been there. He describes the early weeks when people hover around you, and you want them to be there. You just don't want to talk to them.

The most famous, lasting image from the piece is that of loss as amputation. You "will always be a one-legged man. There will be hardly any moment he forgets it. Bathing, dressing, sitting down and getting up again, even lying in bed again will all be different."

When you lose a little child, who's constantly under your feet, crawling in your bed at night, and chattering constantly all day, you have suffered an amputation. You have to physically re-learn how to live every day. Particularly as a mother, you ache to hold your baby again. Grief is such a physical pain.

I will always limp. My broken heart will always give me physical pain. And like a veteran who's lost his leg on a landmine, I will learn to re-enter the world and to walk with as much grace as I can muster.

But I will always limp.

As Lewis says, "Aren't all these notes the senseless writhings of a man who won't accept the fact that there is nothing we can do with suffering except to suffer it?"

These four chapters by Lewis are a gift. Perhaps he and I have made our peace? If the one area I connect with him is suffering in grief, then we won't need to make up in heaven anyhow. The Lamb of God will have already wiped every tear from our eyes.